It has come to my attention that a lot of people have been asking my family about Lyra and exactly what is going on.  I realized that there really isn’t a comprehensive explanation anywhere in my blog, partly because things were discovered slowly over the period of about a year.  So, no profound thoughts in this post, just a summary of where we are with Lyra and some resources:

Lyra has 2 VERY rare chromosome disorders called 9p Trisomy and 16p Deletion.  The documents provided don’t address Lyra’s specific duplication and deletion, because there simply haven’t been very many documented cases. Also, Lyra is the first documented case of someone having BOTH disorders. The doctor’s really don’t have any idea what to expect.  When we received the diagnosis (she was about 7 weeks old) we were told that she would have substantial physical and mental handicaps.  While she is doing much better than were initially told to expect, she does have significant physical and cognitive delays.

Lyra was also born with a number of physical abnormalities that were slowly discovered over the first year of her life, during many hospital stays, a few scares, and more tests than I care to count.  Lyra basically has abnormalities in her brain, heart, airways, liver, kidneys, and GI tract. She also has struggled learning to eat, hence her feeding tube.  I won’t give a full diagnostic list (because it’s boring), but I will give some highlights:

Her brain: Lyra has a brain that none of her doctors have ever seen before.  In fact, I can’t even link documents explaining her most significant abnormality because there simply isn’t any information about it.  Lyra has enlarged ventricles (for unknown reasons), a small cyst, and a fused thalamus.  It is the fused thalamus that we suspect causes a number of her issues, and is the biggest challenge for her neurological team.  They simply have not seen anyone who has a fused thalamus without other areas of the brain also being fused.  Also, they normally see other midline issues (like a cleft lip).  However, Lyra only has the fused thalamus. Basically 98% of all sensory input is processed via the thalamus.  It also regulates sleep/wake cycles (probably the reason why she is such a terrible sleeper).

Lyra’s GI tract has been the major challenge.  Lyra has never been able to eat very well (at this stage she takes almost nothing by mouth).  This caused a number of scares when she was first born and led to a NG tube being placed when she was 1 month old, and a G tube being placed when she was 4 months old. While we still don’t fully understand why she doesn’t eat, that really has been the least of our problems.  The simple fact is, her GI system doesn’t work well, and they have no idea why.  Most of her hospitalizations (10 in her first year) have been because her GI system starts rejecting everything for one reason or another.  Even when she is home and doing well, she pukes ALL THE TIME.  It has gotten more manageable, but we haven’t found anything that completely stops it. Our baseline is 1-2 pukes per day (we do a lot of laundry). We have an amazing GI team at our local Children’s Hospital and they are stumped.  However, they haven’t given up.

Lyra’s other issues are minor and monitored by the appropriate specialists.  At last count,  she is under the care of 9 specialists and her primary care doctor. Yes, that is 10 doctors who see her on a regular basis and periodically have her go in for tests (normally ultrasounds).  Oh, and 3 therapists who see her weekly (occupational therapy, physical therapy, and speech/language therapy). Needless to say, she is well monitored.

So where are we now with her:

Lyra has not been in the hospital for just over 11 months (knock on wood). While she is still considered medically complex, she is no longer considered medically fragile. Although her GI issues continue to be challenging, they have been manageable at home. Lyra is tiny (not on the charts for height and just barely 20 lbs), however she is still growing and her team is happy with her progress.  Due to her genetic diagnosis, they do not anticipate she will be very big. As mentioned before, Lyra does have significant cognitive and physical delays.  She does not talk or walk yet.  However, she has mastered whining, crawling and climbing (she gets into everything).  We are actually ecstatic with her progress, especially in light of the prognosis we were originally given.  She is a special needs child, in the same way a child with Downs Syndrome is special needs. She will never “catch up”.  But that is okay.  We take nothing for granted and enjoy every day we get with her (even when she has been up playing all night).

If anyone has any additional questions, PLEASE do not hesitate to ask.  It is okay to ask me directly.  I really don’t mind.

Here are some resources that I frequently refer to: 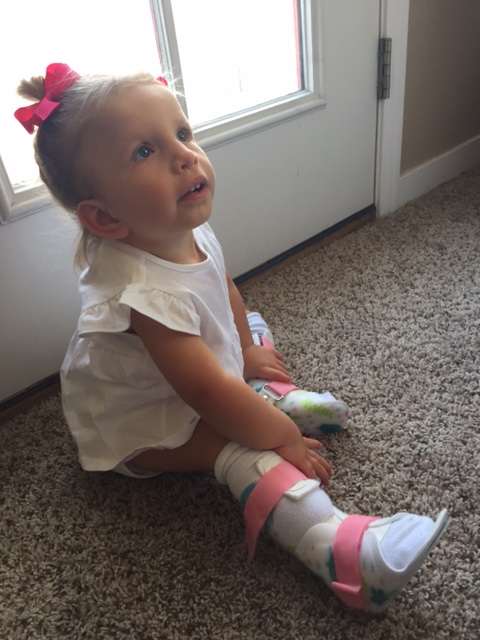 Lyra with her AFOs

One thought on “What the Heck is Going On? A Summary”