Tonight I held Lyra a little longer than she needed when I rocked her to sleep.  Yes, I still rock my 2.5 year old to sleep.  Even if I didn’t normally, tonight would have been a night that I needed to.  Tonight I was reminded of what a blessing it is to still have her with me.  Sure, she hasn’t taken a nap in two days and has fallen apart at family dinners, but that seemed to matter a whole lot less tonight.  See, today I found that one of the moms in my Facebook groups is in the process of saying goodbye to her son.  While I have never met her in person, I know some of her story.  Her son is medically complex (like Lyra) and she spent every last penny to move him from Texas to Colorado about a year ago.  She had hoped that some of the resources here might finally stabilize him.  Unfortunately, that hasn’t been the case.  So, she is saying goodbye to a little boy she didn’t have to bring into her life.  She adopted him, and gave him every bit of joy and love that she had in her.

It made me think.

Today I was frustrated with Lyra.  I wanted her to nap.  I wanted a break.  Just 45 minutes to myself. I don’t think that is all that unusual for a parent.  However, Lyra had different plans.  She ended up watching Winnie the Pooh on my bed. I was frustrated for a few hours after that non-nap.  But, when I went to put her down for bed tonight, I reflected on the other mom.  The mom who is facing my biggest fear:

What do you do when there are no more options?

I felt guilty for being so frustrated with my daughter. She is medically so stable right now, and we still have other options to try if things take a turn. I felt guilty for not enjoying her little smile and laugh as she sat in her bed during her “nap”.  I felt like I just needed to hold her a little longer.  And once I put her down, I did something I never do.  I prayed.  Not to a god, but to the universe in general.  I thanked the universe for giving me so many days with her.  I promised to treasure those more often than I do.  I wished for a peaceful night, with a happy baby in the morning.  But it’s okay if we have a rough night too. Because, I get to have another morning with her.  And for that, I am so grateful. 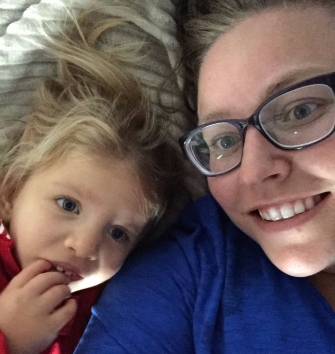